At various times, I have walked among the homeless in our great city. Well, really, we all have. Some occasions I have touched them, hugged them, fed them, talked & prayed with them and watched them as they live and move around us and as they sleep. Compelled to do something to change the situation they are in. Angry because SOMETHING should be done. But, I am learning and my observation is this: They are not have nots, they are want nots.

Them not wanting us. Not wanting the looks, the mistrust, the disgust, the questions  for the reasons why they are where they are. Not wanting to eat with hypocrites and religious salesmen and those who despise them and consider them “less than” for where they are. Those who think they are a “situation” or “problem to be solved” constantly trying to empower them to come up out of the pit they are in.  All the while, them, just wanting to be loved and accepted and if not, left alone to live their lives.

Us not wanting to be burned or manipulated because we did help at one time and we were robbed or lied to. Our compassion taken advantage of and abused. Not wanting to bother, to really engage or truly serve. Oh sure, for a moment or occasion to check it off our list or gain an accolade here or there for our efforts. But, as Jesus said, in that moment, we have our reward. But what about for a duration? Walking with them through their plight? Their pain, their burdens, their mistakes. Their anger, drunkenness and stupor. Their arrests and bad decisions. Their living, day to day. 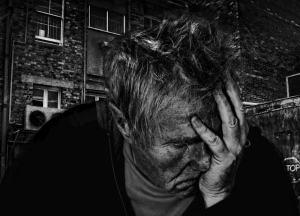 Maybe the alternative is rehab, mental hospital pumped full of meds that put them in a state much worse then what they went in for. Maybe the alternative is a house of violence or sex servitude to a father or other relative or rape and abuse by a pimp. Perhaps the alternative is standing in line at DSS with a thousand questions they can’t answer or if they answer them honestly it would disqualify them from the help they so desperately need. Or maybe they can’t get help because of the financial situation they were in last month but this month, they were abandoned and need help NOW. But their past history says they make too much money!!!

Anyway…..no one knows. But the homeless, themselves, know. And chances are and are even more likely, that they are the only ones who ever will. Do we want to know the truth? Or maybe, to quote a famous movie, “we can’t handle the truth”. Do they want help? Or just to disappear from society? Maybe they are hiding. From a past, a partner, a lie, the truth. Maybe “homeless” is the only safe place they can find.

Maybe “choice” because they were abandon by husband, wife, society. We don’t know what to do with people, in general, much less those we can’t control, so we just let them disappear. After all, we have our own lives and families to fend for. And if not for the grace of God…there go we….on the street, under a bridge, in a shelter….no where to go and no heart to hold us.

Maybe it’s anger that makes the streets a much friendlier place than living and moving within the system that WE so quickly embrace and live in daily. The system that tells us what is to wear, eat, what pills to take for what disease, what is acceptable and what is not. A system that brings a comfort of not having to guess where our next meal is coming from but that we allow to “feed” us all the rules and guidelines for living. The system that is more binding than, perhaps, the wide open air. A system that abused them, bound them or meant them no harm but put them in a position that was unbearable. Or maybe bearable but unworthy of their trust. Of all our trust.

Maybe they are lazy and don’t want to be responsible. Maybe they are drug addicts and alcoholics who would rather stay wasted than get a job and be productive members of society. Or perhaps so addicted , they are slaves who cannot ever imagine freedom, so they surrender themselves to the slave master. Maybe they are hustlers who stand on street corners and peddle for our hard earned cash who we ignore at stop lights by looking the other way. Maybe they are liars who are just out to take advantage of those who are most easily manipulated because they are most easily touched with the feelings of another man’s infirmity.

Each of you probably have your own thoughts on the subject. And some of you, like me, have judged the homeless. It’s US and THEM. Really, it’s not. It’s WE. All living in the same city, fighting the same battles. Some of us just do it in a house, a trailer, under a bridge or in a shelter. But we all live and want the same things. To be free, happy, supplied with what we need to live comfortably. To be loved, cared for and respected.

So do we even need to act? Do we need to do anything? Do we need to empower or just embrace? Do we need to improve them or invest…. our time, our hearts? Do we need to develop programs or develop compassion? A few places I find in scripture tells me what the Father & Jesus said about the homeless and how to touch them. One man, he told to sell all that he had and give it to the poor. Isaiah told us to “bring to your house the poor who are cast out.” Leviticus says, ‘If one of your brethren becomes poor, and falls into poverty among you, then you shall help him, like a stranger or a sojourner, that he may live with you.” By no means, an exhaustive study, but a good place to start.

So I thought…..what if the homeless are not homeless BECAUSE of them but FOR us?

Get FREE Devotionals every week when you SUBSCRIBE TODAY!!

Great weekend celebrating all the fathers in our lives! #family #legacy #fun
Kindness... so needed in our world today. ❤❤
Mighty message of our Pastor @albricejr . The Holy Spirit and the Word is our healing from the past.
Great day celebrating this beautiful girl with family. Our granddaughter who turned 6 today!! Shogun and bowling!!!
Just a little display of the grey!!!